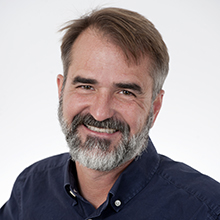 No news to display

No events to display

END_OF_DOCUMENT_TOKEN_TO_BE_REPLACED

Eric is a full-stack developer with many years of experience working with various content management systems. He has extensive experience as a Drupal programmer. He has attended nine DrupalCons and was the local lead for DrupalCon New Orleans. Since, 2010 he has been a co-­organizer of the Louisiana Drupal Users Group and an organizer and speaker for two New Orleans DrupalCamps.

His computer career began in 1988 working for MIS/Data Systems Design, providing network and system administration, and PC support. In 1993, he began working with the Internet providing connectivity and HTML programming.

A native of St Bernard Parish, Eric is an active member of the local community. His interests include cycling, acting, yoga, and conservation education.